Upon discovery of Michelangelo’s concealed neuroanatomical
images in “Separation of Light from Darkness,” by Suk and
Tamargo in 2010, there remained a compelling need to
investigate in greater detail the reasoning behind
Michelangelo’s depiction of imagery of the brain, brainstem,
spinal cord, eyeballs and optic nerves in the Sistine Chapel. At
cursory glance, “Separation of Light from Darkness” depicts
God’s first act of Genesis 1:3-5 (King James Bible), in which
he creates light and separates it from the darkness, enveloping
the world he has just created. It is a seemingly simple,
conspicuous act, but careful analysis reveals that
Michelangelo used his artistic, academic, and poetic genius to
embed layers of symbolic meanings. The authors believe that
the great artist infused a visual metaphor of a scene from
Plato’s “Allegory of the Cave” in Book VII of The Republik
(~380BC) to represent his key ideologies in Neoplatonism and
pious convictions.

Michelangelo painted the Sistine Chapel during the flourishing
period of High Renaissance (~1475–1527). High Renaissance
art followed and reflected the period of ‘rebirth’ in which
philosophy, literature, art, and sciences drew on ancient
knowledge from Classical Antiquity, principally the ancient
Greeks. The Renaissance was a period of rapid growth where
people applied new found knowledge to the Classical Greek
studies of Socrates, Plato, and Aristotle (from about the 4th to
3rd century BC). One of the most influential ancient
philosophers was Plato (~428-348 BC) whose teachings
propagated throughout Athens for about two centuries around
his lifetime, through his established school, the Academy. His
philosophy of Neoplatonism was resurrected by an Italian
baron, Cosimo I de Medici who employed Marsilio Ficino
(1433-99) to lead the Florentine Platonic Academy (of which
Michelangelo was a student) and translate all of Plato’s
writings into Latin.

Through analysis of Michelangelo’s paintings, his preliminary
sketches, poems, written letters, and the political and religious
context of his time, the authors attempt to provide key evidence
to reveal the meaning and symbolism behind Michelangelo’s
concealed anatomic representations. 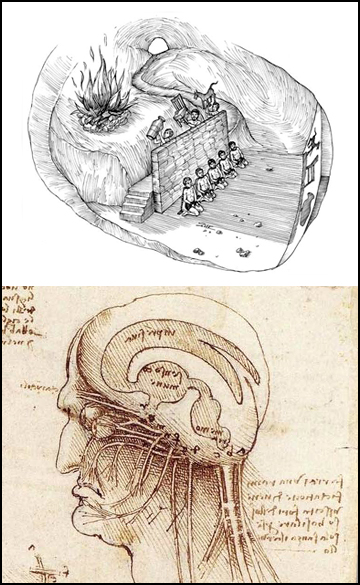 Access to the full text of JBC articles is free and unrestricted on jbiocommunication.org. Authors are required to assign one of two types of licenses when a manuscript is accepted for publication. Under the terms of that agreement, authors retain copyright to their text and figures, but grant the JBC a perpetual license to publish the manuscript. The JBC offers authors a choice in publishing and licensing of their article:

Please select one of the licenses, fill out the document, and submit a signed copy to: upload.JBC_agr.tb10c8mf3x@u.box.com

JBC’s policies are compatible with all major funders open access and self-archiving mandates. Authors at their discretion, or in compliance with a funder-mandated open access policy, may grant to the general public the nonexclusive right to copy, distribute, or display the manuscript subject to the terms of the Creative Commons license.